Teetering on the Brink of Catastrophe 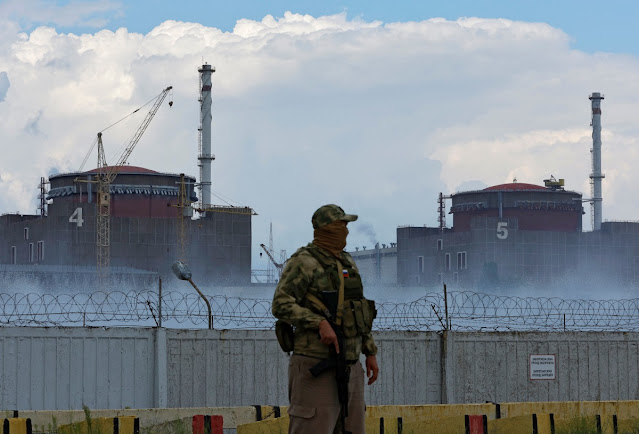 The mind-bending absurdities of the imperial propagandists in western state-controlled media are reaching unprecedented heights in recent weeks, as the inevitability of Russian victory in Ukraine becomes increasingly evident.

Numerous reports in various empire media mouthpieces are now spinning a ludicrous yarn that Russia is planning to destroy Europe's largest nuclear power plant in Zaporizhzhia, Ukraine, and thereby unleash an ecological disaster upon the planet.

Never mind that the Russians control both the plant itself and the region surrounding it. The desperate empire propagandists would have you believe Russia has not only been launching artillery strikes against the massive Soviet-era plant, but has even wired it with explosives.

Never mind that the local populace is overwhelmingly Russian or desires to formally become so, nor that the prevailing winds would spread deadly radiation over massive swathes of Russia.

No, we are expected to believe that Vladimir Putin’s Russia is so insanely self-destructive that it would seriously do such a thing!

And therefore Putin and his people must be destroyed, once and for all, to save the planet.

Where does it go from here?

Now that the narrative-shaping agents of the Empire of Lies have turned the dial of mendacious absurdity up to eleven, what comes next?

I dread to contemplate the likelihood that a substantial percentage of the citizenry of the western world may actually be persuaded to believe such transparent atrocity tales.

I dread even more to contemplate the degree to which the mediocre minds in positions of power within the Empire of Lies are being successfully persuaded that these absurdities have a basis in reality, and that therefore “all options must be on the table” to deal with the “existential threat” Russia allegedly poses to human civilization.

Make no mistake, it is true that the overwhelming Russian military victory in Ukraine constitutes an existential threat to the moribund North Atlantic Treaty Organization. The Mother of All Proxy Armies NATO built in Ukraine over the previous decade was specifically designed to arrest Russian resurgence, and to effect regime change in Russia that would once and for all eliminate from the international scene the vexing influence of Vladimir Putin and his defiance of imperial aspirations and edicts.

It must be clearly understood that the defeat of NATO’s proxy force in Ukraine will be interpreted throughout much of Europe – and throughout the world, for that matter – as an explicit defeat of the American Empire. It signals the end of US global hegemony, and, in the eyes of much of the world, it will enshrine Putin and Russia as the David who fearlessly stood up to challenge and then summarily defeat the supposedly unbeatable Goliath.

And this is perfectly understood in the various loci of western power.

It will also mean the end of the European Union, which has been erected on the illusory power of NATO as an indomitable military force.

This is why the empire-at-all-costs cult in the western world is now consumed by an existential crisis – one that is pushing it towards the serious contemplation of radical last-ditch efforts to preserve its power and relevance in a rapidly changing environment of global geopolitical realities.

I therefore increasingly fear that western popular opinion is being molded and primed to support heretofore unthinkable extreme “preemptive actions” against Russia.

We are teetering on the brink of catastrophe.

But it’s not the one posed by the patently absurd notion that Russia, on the cusp of a great military victory in Ukraine, is seriously planning to destroy the largest nuclear power plant in Europe in order to assuage the humiliation of defeat in the imaginary war western propagandists have been selling to their citizenry for the past several months.

We must realize that there are indeed forces within the halls of rapidly evaporating imperial power who are ready and willing to launch a decapitating nuclear first-strike against Russia in order, as they apparently believe in their twisted minds, to somehow snatch victory from the jaws of defeat.

We must awaken to the very real risk that, like Lucifer cast down from heaven to earth in Milton’s Paradise Lost, those whose wealth, power, influence, and very identity depend on the perpetuation of the American Empire may very well be willing to do what they are now projecting upon Russia: to salve the humiliation of defeat with a scorched earth policy that could render the entire northern hemisphere of our planet a wasteland for generations to come.

"Is this the region, this the soil, the clime,"

said then the lost Archangel, "this the seat

that we must change for Heaven?

This mournful gloom for that celestial light?

"Be it so, since he who now is sovereign can dispose and bid

what shall be right: farthest from Him is best.

"Farewell, happy fields where joy for ever dwells!

And thou, profoundest Hell, receive thy new possessor –

one who brings a mind not to be changed by place or time.

"The mind is its own place, and in itself

can make a Heaven of Hell; a Hell of Heaven.

What matter where, if I be still the same?

And what should I be, all but less than he

whom thunder hath made greater?

"Here at least we shall be free.

The Almighty hath not built here for his envy,

and will not drive us hence:

Here we may reign secure; and, in my choice,

To reign is worth ambition, though in Hell.

"Better to reign in Hell than serve in Heaven."


Posted by William Schryver at 8:23 AM