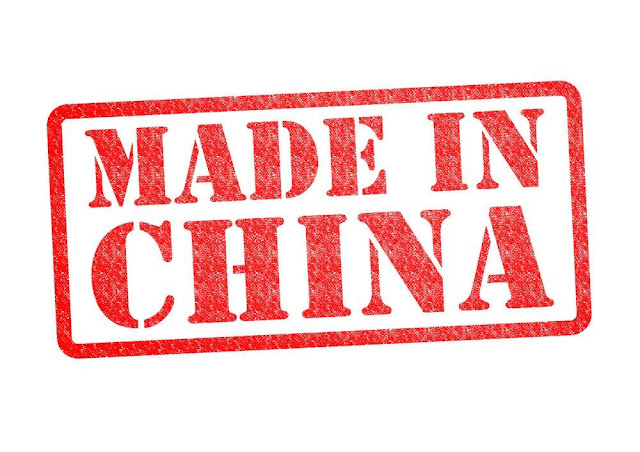 Important Note: Since I made this post I've been inundated on Twitter with offended Chinese and other non-Americans who have actually persuaded me that my perspective may very likely be distorted by the fact that high-quality Chinese products are simply not permitted to enter American markets -- and that the design and quality of "Made in China" products sold to Americans are actually dictated by the exogenous parties who order those products to be made precisely as specified -- and at extremely low cost.
I confess I had not previously taken into consideration these realities. To be sure, I probably should have. But it simply didn't occur to me. And when a not-quite one-year-old "Made in China" fan broke on me today ... well, I used the occasion to vent about the other "Made in China" crap I've hated over the years.
That said, I have now come to view matters with greater enlightenment. I hope that, in years to come, true "free trade" can bring the high-quality Chinese products to my search results.
In any case, I'm leaving my post up, because I'm sure many Americans can relate ... and maybe now see things with a more nuanced perspective.

Although it may not be quite as true today as it used to be – at least when it comes to some things – the fact remains that “Made in China” is generally stamped on indisputably mediocre or outright crappy products, guaranteed to be of inferior quality and workmanship, and quite often to simply not work at all – or at least not for very long.

To the extent this perception exists – and I know from decades of first-hand experience that it is justified – the Chinese people should be embarrassed, even ashamed. It’s the kind of perception that could literally require generations to reverse, even long after it ceases to be true – assuming it ever does cease to be true.

The Japanese, on the other hand, have long been known for producing high quality, durable products. Their automobiles, from the 1970s to the present day, have typically been prized by owners around the world for their quality, reliability, and extraordinary durability.

Over the course of my increasingly long life, I have owned a series of five Datsun/Nissan vehicles. Great little cars and trucks. Provided with even a minimum of responsible care, they will provide their owners with 250,000+ miles of reliable service.

The same could be said for Honda and Toyota vehicles, multi-decade-old models of which are still frequently seen plying the roads of America.

Speaking of Honda … you want a small-engine tool or generator, and you want it to always work and last a lifetime? You buy a Honda. Sure, these days you pay a bit of a premium, but it's more than worth it in the long run.

“Made in Japan”, as a general rule, is a mark of high quality and pride of workmanship.

The United States has long-since off-shored the lion’s share of its formerly unparalleled production might. But there are still several things “Made in the USA” that are preferred by the discriminating buyer. America doesn’t make nearly the variety of things it used to, but what it does make is more often than not “best in class”.

“Made in the USA”, as a general rule, is a mark of high quality and pride of workmanship.

The same cannot be said for stuff “Made in China”.

If China really wants to become respected around the globe, I am convinced there is nothing that would achieve that objective faster than them taking it upon themselves, as a people and a nation, to make stuff that everyone desires for its quality, functionality, and durability. Until then, “Made in China” will remain a hiss and a byword, and the universal synonym for “cheap crap”.

Posted by William Schryver at 5:55 PM