The End of NATO, American Imperial Hegemony, and The Rebirth of A Multipolar World 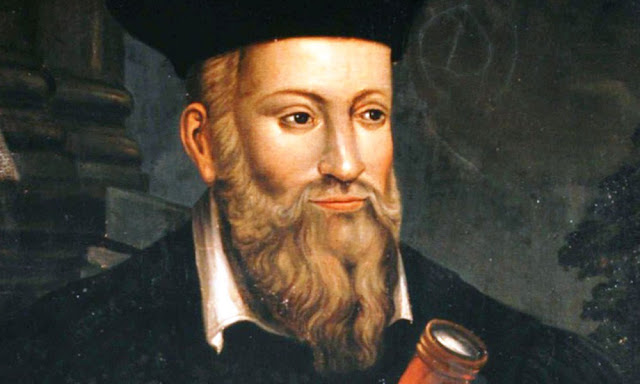 It's appearing increasingly likely that the Russians are going to remedy the "strategic depth" issue they perceive in eastern Ukraine – and probably much sooner than later.

(Originally posted to Twitter on January 13, 2022 – screen shots posted below.)

As I have noted numerous times in recent months, Ukraine has but two options: accept their role as a buffer state between Russia and NATO, or be dismembered.  It would now seem they have eschewed the former, and therefore they will cease to persist as presently constituted.

That said, I am convinced Russia has no intention whatsoever to assimilate the entirety of Ukraine.  Rather, I expect them to destroy Ukrainian military capabilities, and to annex eastern Ukraine to the Dnieper River, thereby also establishing a land bridge to Crimea.

What will be the US/NATO response?  Well, I consider it 99.99% certain there will be no military response – none whatsoever.  There is no way in hell the Pentagon is going to risk having the myth of US military impregnability exposed in a futile attempt to help Ukraine.

The US will thump its chest, announce various "severe sanctions" (including excommunicating Russia from SWIFT), and also attempt to impose a blockade of Russian energy exports to Europe.  But this will fail, for the simple reason that Germany will not / cannot accede to it.

The US will command the world to cease exporting to Russia a long list of items.  Then a long parade of DC #ThinkTankMonkeys will make the rounds of the MSM news channels confidently guaranteeing the imminent destruction of the Russian economy and the end of the Putin era.

But most of the world will simply ignore the toothless US edicts.  Large portions of SWIFT volume will move to alternative platforms (already in place); trade settlement in USD will decrease dramatically, Nordstream2 will start delivering gas to Germany before next winter; US sanctions on Russia will prove utterly impotent; regional trade and currency blocs will rapidly gain market share, and the hard reality of a new era of multipolarity and the effective end of NATO and the once-mighty American empire will become undeniably apparent to all. 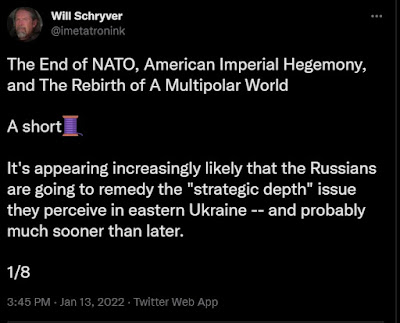 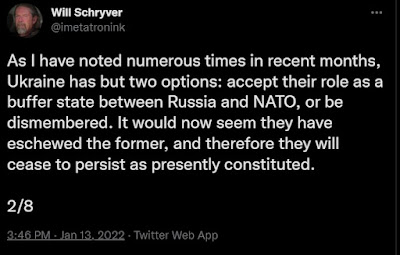 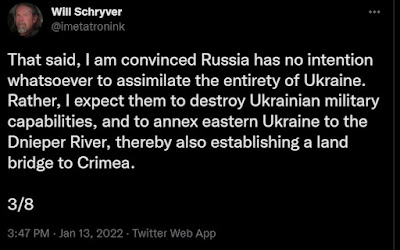 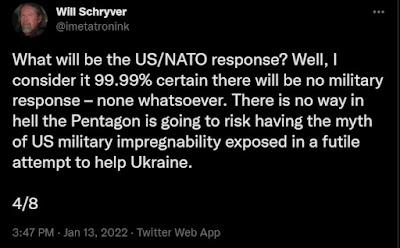 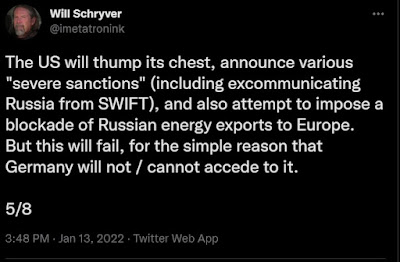 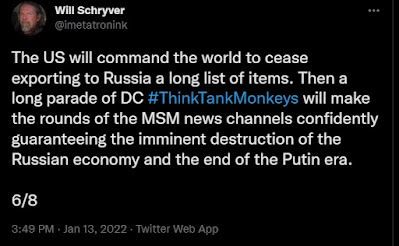 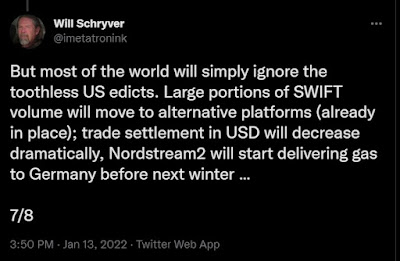 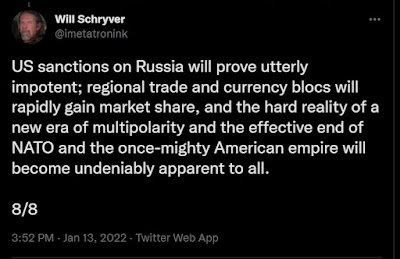 Posted by William Schryver at 7:13 PM